After finishing an Illustration degree at the University of Kingston, Tim became an apprentice to the painter-etcher Piers Browne at his studio overlooking Wensleydale.

He went into business with the Prince’s Trust and his work has been exhibited at over two-hundred shows since. He paints large landscapes focused around trees, and seascapes inspired by the Isle of Wight, when he lives and makes his etchings. He can be found swimming in the sea and walking in the hills, with his son Harry and dog Wookiee in tow.

He had a studio at the Chocolate Factory in North London, has sixteen etchings in the collection at the Palace of Westminster and has won the Brighton Open House Best Artist prize. 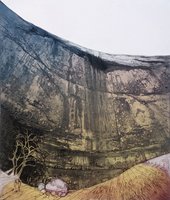