The Connor Brothers are known for their paintings and prints featuring vintage pin-up beauties and Old Hollywood starlets in seductive poses, paired with captions that exude a dry sense of humor. The Connor Brothers—a pseudonym for the British artists Mike Snelle and James Golding—initially retained anonymity under their fictional guise. They posed as fictional twin brothers Franklyn and Brendan Connor, who had escaped from a California cult (called “The Family”) by running away to Brooklyn at age 16 to become artists.

We Must be Careful What We Pretend to be
Sold 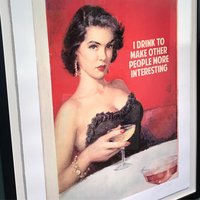 I Drink to Make Other People More Interesting
Sold