I began exhibiting my contemporary, colourful paintings in 2019. Within a year I was invited to exhibit alongside some of the UK's most accomplished artists including 5 Turner Prize winners and 3 of my personal art heroes Antony Gormley, Grayson Perry and Maggi Hambling.

I am excited to be working in partnership with a number of galleries across the UK, from Scotland to the tip of Wales and many regions in England. Despite only beginning to exhibit in 2019, I have been delighted that my paintings have received wide appreciation and now hang in homes as far afield as New York, Jerusalem and Australia.

I aim to capture an essence rather than a literal interpretation of each subject. I enjoy not just the colour but the textural quality of paint and I work with both to achieve the finished painting. With a dandelion, for instance, I paint with needles to capture their distinctive petals and for my poppy paintings I make my own ‘palette knives’ by recycling milk cartons.

I have also become known for my interpretative seascapes, landscapes and abstract works, usually working in acrylics but with some mixed media. Indeed many of my recent commissions have been for large, expansive seascapes as well as for the ever popular poppies and roses.

The new ‘Tranquil’ series, launched in July 2021 offer a subtle, calming palette. The paintings in this series were painted after I received my first vaccine which prompted a greater sense of calm and positivity.

The common thread in the subject matter is my love of nature, inspired by trips around the coast of south west England and time spent growing plants in my small city garden. 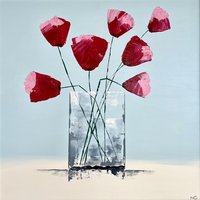 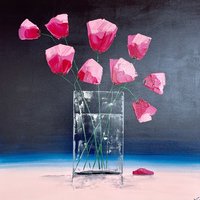 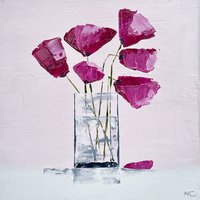 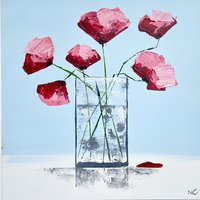