Mark was born into a long line of painters, many of whom had flocked to his birthplace of St Ives, Cornwall, to become artists. After a chance encounter with the new wave musician Adam Ant at the age of just 11, he became drawn to the punk subculture and its expression of working-class angst.

His studies at art college were interspersed with frequent trips to London, where the punk scene was alight. There, he made friends with some of the movement's pioneers and troubadours, including the Sex Pistols and the Stranglers, who remain close friends to this day. A career in videography beckoned, and Mark went on to work as a cameraman and a director of photography for bands like the Police and Frankie Goes to Hollywood before joining the BBC.

During his successful film career, Mark has directed and produced documentaries on Billy Fury, the Beatles, John Lennon, David Bowie, Sid Vicious, the Sex Pistols and more. These legendary figures, along with his friend and fellow neon artist Chris Bracey, inspired Mark to create the Illuminati Neon brand.

Featuring punk-inspired imagery emblazoned with familiar lyrics and the language of the subculture, his works often incorporate artefacts and memorabilia from the era, including flags and t-shirts. True to his punk rock roots, Mark combines montage, typography, graphic art and neon to channel not just his own narrative but the chorus and chaos of a generation. 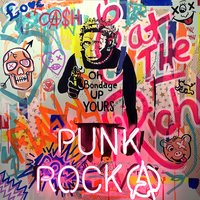