James Tatum, painter, photographer, and poet, was born in 1944. He showed early interests in drawing, writing, photography, and architecture. After his formal education at first in English, History and Philosophy and later in Economics, Business Law and Management, he began what turned out to be a long career in industrial design, engineering, and manufacturing in Canada. He still found time to draw and paint during his travels. He moved from Canada to the U.K. in 1987. In 2007, he moved from London to Devon in order to paint full time

James primarily paints expressionistic landscapes of the West Country or wherever his travels take him. All of his paintings begin en plein air and the larger works are
then completed in his studio in Exeter. His paintings are concerned with balancing close observation and structure with his emotional, visceral responses to the landscape. His goal is to make paintings which are physically exciting and therefore, involve experiment and risk taking.

In March 2014, he was elected Academician, The South West Academy, SWAc.

He regularly exhibits with the South West Academy and is represented throughout
the U.K. by several galleries from Kent to Cornwall as well as in the U.S.A, Holland and Switzerland. His paintings are in private collections the U.K., Holland, Italy, Switzerland, Canada, Australia, New Zealand, and the U.S.A. 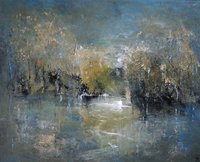 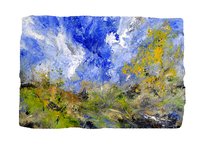 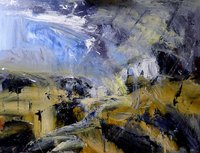 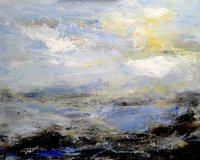 The Promise of a Good Day
Sold